WASHINGTON, March 7, 2019 /PRNewswire/ — On Friday, March 8, the Newseum opens a groundbreaking exhibit, “Rise Up: Stonewall and the LGBTQ Rights Movement,” which explores the modern gay rights movement and marks the 50th anniversary of a June 1969 raid of the Stonewall Inn in New York’s Greenwich Village. The protests following the raid are considered to be the catalyst that inspired the modern gay liberation movement and the ongoing fight for LGBTQ civil rights.

Family Pride Weekend at the Newseum (March 9 and 10) celebrates the exhibit opening by offering free admission for up to two children (18 and younger) with the purchase of one adult general admission ticket. Saturday will feature fun activities with mix107.3‘s street team and a program hosted by The Jack Diamond Morning Show’s Jimmy Alexander at 2:30 p.m. in the Knight TV Studio. The Family Pride Weekend offer is only available at the Newseum admission desk on March 9 and 10.

The “Rise Up” exhibit explores key moments of gay rights history, including the 1978 assassination of Harvey Milk, one of the country’s first openly gay elected officials, the AIDS crisis, Rep. Barney Frank’s public coming out in 1987, the efforts for hate crime legislation, the implementation and later repeal of “Don’t ask, don’t tell” and the fight for marriage equality.

“Rise Up” also examines popular culture’s role in influencing and reflecting attitudes about the LGBTQ community through film, television, sports and music and explores how the gay rights movement harnessed the power of public protest and demonstration to change laws and shatter stereotypes.

A yearlong program series, launched in June 2018, focuses on historic and contemporary topics from “Rise Up” and features journalists, authors, politicians and other newsmakers who have led the fight for equality. The exhibit, which will travel nationally, includes educational resources for students and teachers.

ABOUT THE NEWSEUM
The mission of the Newseum, located in Washington, D.C., is to increase public understanding of the importance of a free press and the First Amendment. Visitors experience the story of news, the role of a free press in major events in history, and how the core freedoms of the First Amendment — religion, speech, press, assembly and petition — apply to their lives. Considered one of the most interactive museums in the world, the Newseum has seven levels with 15 galleries and 15 theaters. The Newseum also reaches millions of students through its robust offering of on-site classes and workshops. The Newseum is a 501(c)(3) public charity funded by generous individuals, corporations and foundations, including its principal funder, the Freedom Forum. For more information, visit newseum.org and follow us on Facebook, Twitter and Instagram. 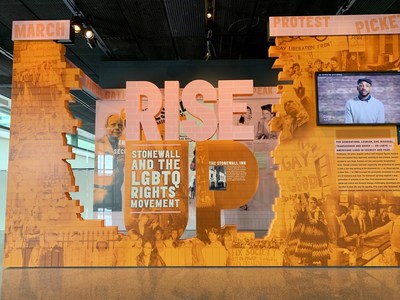