goTenna Pro X used with situational awareness applications supports the efforts of military, law enforcement, wildland firefighters, and disaster response teams, when no service is not an option. goTenna Pro X builds on the functionality of Pro and enables seamless integration with other Android, iOS, Windows, and Linux applications. Current applications include ATAK and AGIS LifeRing with several more in development.

Today’s release builds on the success of goTenna Pro, the company’s tactical-grade mesh networking device that launched in June 2018. Developed by the Department of Defense, the ATAK app is used to support complex communication and coordination needs of more than 100,000 customers worldwide, including the military, Air Force, Army, Special Operations, National Guard, the Departments of Justice and Homeland Security. Developed by AGIS Inc., LifeRing allows users to easily and rapidly establish secure ad hoc digital networks that include all within a selected range.

Smartphones with specialized tactical mapping applications are vital equipment for today’s tactical operators to maintain real-time situational awareness. As seen in the recent spike of climate-related natural disasters, however, responders cannot rely on centralized cellular or wifi connectivity to communicate.

From the Camp Fire in California to Hurricane Michael in Florida, vulnerabilities in central communications infrastructure were exposed. In 2018 alone, traditional communications failed tactical teams due to damage cables and fibers and even data throttling by carriers. Critical failures and loss of service for extended periods of time, compounded with the ever-present threat of cyberattacks, make the front lines where first responders operate particularly susceptible to danger.

To combat this vulnerability, experienced tactical teams including the U.S. military, CALFIRE, and the Texas Department of Public Safety have turned to goTenna for its mesh networking devices and software that enable smartphone connectivity independent of traditional communications infrastructure.

Developed for military and public safety applications, goTenna Pro X is packed with a suite of powerful features:

How goTenna Pro X Works
goTenna Pro X combines long-range burst data transmitted over VHF/UHF with iOS and Android devices. Even when unpaired to a smartphone, goTenna Pro X can serve as a multi-hop mesh node for all other Pro X devices – eliminating or reducing the need for base stations and repeaters.

The pocket-sized device pairs to a smartphone via Bluetooth or USB, and all data is displayed in the smartphone application. 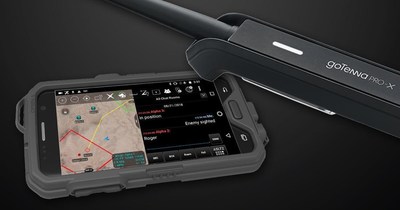 Pro X is priced at $849, which includes one mesh-networking radio, the user’s choice of UHF or VHF antenna, the goTenna Pro Team Awareness App, ATAK plug-in (if required) and unlimited service user accounts for field administration and configuration of the Pro X

Pro X Deployment Kits are also available priced at $24,999 per kit. Deployment Kits come standard with 20 Pro X devices, and can charge and maintain up to 30 all in one rugged tactical briefcase. At 25 pounds, Deployment Kits can be easily be transported and deployed anywhere in the world.

goTenna is the world’s leading mobile mesh networking company and provider of off-grid connectivity solutions for smartphones and other devices. goTenna’s innovative mesh networking protocol is embedded into low-cost, low-power devices and paired with easy-to-use mobile apps enabling mobile, long-range connectivity even without cell, wifi or satellite. The goTenna vision to create resilient connectivity was ignited during Hurricane Sandy in 2012, when approximately a third of cell towers and power stations were knocked out. Based in Brooklyn, goTenna is backed by notable investors including Union Square Ventures, Walden Venture Capital, MentorTech Ventures, BBG Ventures (a subsidiary of Verizon), and Bloomberg Beta. For more information, visit gotenna.com.

The Department of Homeland Security (DHS) Science and Technology Directorate (S&T) deployed the Android Team Awareness Kit (ATAK) to support the complex communication and coordination needs of the multi-jurisdictional responders. ATAK is one of those game-changers that dramatically alters the user’s understanding of the action in any given area of operation (AO). A government-off-the-shelf app for Android smartphone, ATAK is available to all government agencies for free. The app uses GPS and maps to give the user a real-time view of the AO. This new situational awareness capability includes “Blue Force Tracking” to see where team members are (which reduces friendly fire incidents and helps with coordinating movements), “Red Force Tracking” to see where the bad guys are (obvious advantages), as well as terrain, weather, and other topographical elements. ATAK gives operators in the field a dramatically enhanced real-time situational awareness. It provides them with enterprise information sharing capabilities that will further increase safety, collaboration and mission successes. For more information or to request a copy, visit atakmap.com.

LifeRing software enables Smartphone, Tablet and PC users to easily and rapidly establish secure ad hoc digital networks that include all within a selected range. Once the AGIS LifeRing Smartphone Icon is selected, LifeRing appears on screen as a map based display. This display provides all on the network with “a sense of where you are”, allowing all users to easily see their present location while enabling them to view the location and status of all other users. Once the visual is in place, LifeRing then provides the means to collaborate, and communicate via PTT, Text Messaging and Voice. The exchange of information occurs in real-time between the participants. For more information, visit agisinc.com/lifering.